If you are one of those travelers who love to turn the pages long sealed and kept hidden from the human eye, if the word ‘Supernatural’ gives you an adrenaline rush, or you are someone who likes to push the boundaries a little and take a peek into what’s happening in the strange, mysterious world out there, then this post will surely give you some inspiration for your next trip. Old mines, abandoned buildings, paranormal stories. Yes, we are talking about Ghost Towns.

We present to you 10 of the creepiest ghost towns around the world that will offer you an adventure of a different kind.

Pyramiden was once a showcase of the Soviet Union, with a blend of mining community, set between mountains, glaciers and fjords in the Svalbard archipelago, Norway. Today, it’s an Arctic ghost town and became a focus of curiosity for many. As the legend goes, Pyramiden was abandoned overnight and even the inhabitants were given just hours to pack their bags and leave.

No one knows the reason as people just walked away suddenly, stopping their work in between. Situated between Norway and the North Pole, Pyramiden can be reached by boat from about mid-May until the beginning of October. In winter, if you are lucky, you will surely be able to get a glimpse of polar bears.

Located in south Namibia on the coast of the Atlantic Ocean, Pomona was once a mine for natural treasures far beyond diamonds but now its just an abandoned site with mysterious voices of sand dunes. This ghost town was called the ‘diamond city’. A relic from the diamond rush early 1900, mining in Pomona area started in the 1860s.

When you visit, you would find an abandoned train station on the dirt which was once used to receive and dispatch goods to and from Pomona. Make sure you reach before 1 pm as they don’t allow visitors in the afternoon as it is located in the Sperrgebiet, a restricted gold mine area. 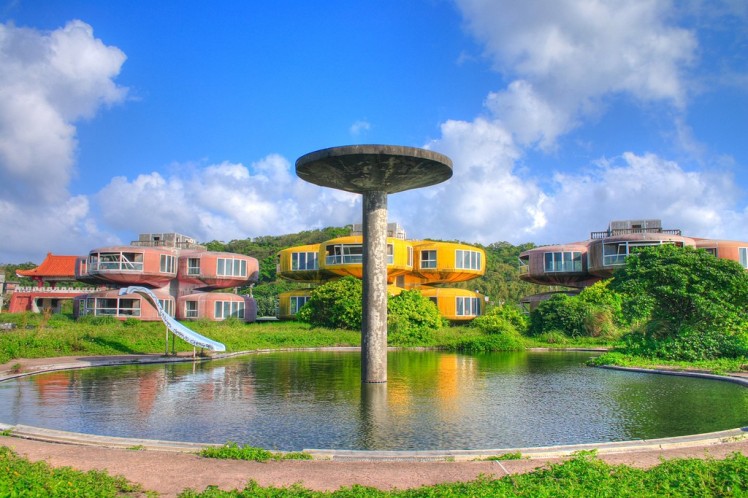 Some travelers called them the ‘UFO houses’ or ‘ruins of the future’ because of their bizarre UFO alike appearance. And there’s little doubt that the abandoned buildings making up Sanzhi Pod City constituted one of the world’s strangest modern ghost towns before they were torn down in late 2008. Located in Taiwan, the Sanzhi town resort was torn down due to some unfortunate accidents. It became tourist attraction in recent years due to its colorful pod shaped homes scattered across the overgrown coastline. 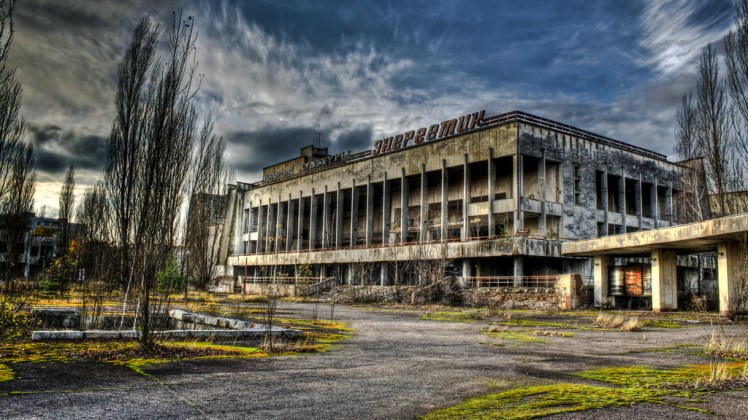 The 1986 Chernobyl disaster was the worst nuclear power plant accident in history. The accident took place during a system test at reactor number four of the Chernobyl plant, close to Pripyat, a Ukrainian town. It was heavily affected by the disaster and has now been completely abandoned. Once a beautiful town, its 50,000 inhabitants were evacuated 36 hours after the accident. It has become a chilling ghost town today. Dolls are scattered on the floors of abandoned kindergartens; children’s cots are littered with shreds of mattresses and pillows.

Located off the coast of Nagasaki in Japan, Hashima is a small island that has long been abandoned. With its warship-like appearance, it’s commonly known as Gunkanjima (or ‘Battleship Island’). The island was bought by Mitsubishi in 1890 for building Japan’s first large concrete building, at nine stories high.

During the Second Sino-Japanese War, between 1943 and 1945, the Japanese government and Mitsubishi transported Korean and Chinese prisoners to the island on Mitsubishi-owned ships known as “hellships,” and then forced them to handle the most dangerous work in the coal mines. Hundreds and thousands of the prisoners died in the poor living conditions and coal mining accidents. Hashima featured in the 2012 James Bond movie, Skyfall. 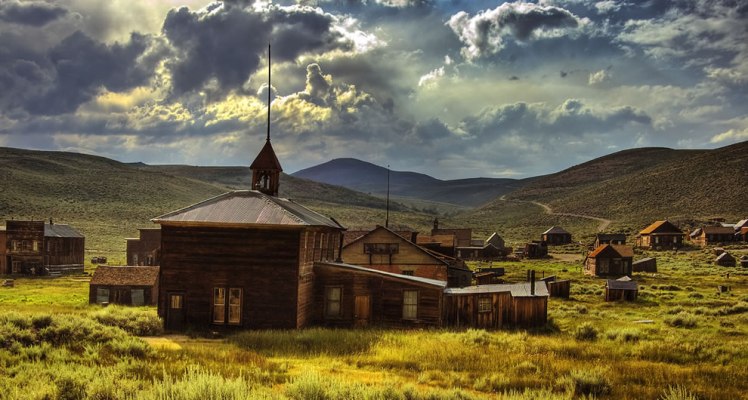 The ghost town of Bodie, California, is one of the most authentic abandoned gold- mining towns in the world. People believe that Bodie is inhabited by ghosts who guard the town against pilferers. Any visitor who dares to remove any artifact, would be plagued by the dreaded “curse of Bodie, as the folklore goes. There are many stories of travelers who have seen or felt paranormal activities in this town.

Greece is a country with long and turbulent history and hence it is dotted with interesting monuments and places. A very special section of the country is the amazing ghost towns, scattered around the mainland or the islands. The most renowned Ghost town in Greece these days, Spinalonga is a modest island situated in the inlet of Elounda in eastern Crete.

As a result of its vital position, it was initially utilized for residence purpose, and a noteworthy fortification was built there during the Venetian standard. The island was transformed into a pariah settlement in 1903, and it was in the end relinquished when every one of its tenants was cured in 1957. The last occupant, a minister, left the island in 1962. Today, Spinalonga is a well-known vacation spot, while acclaimed books and many movies have been propelled by its rich history. 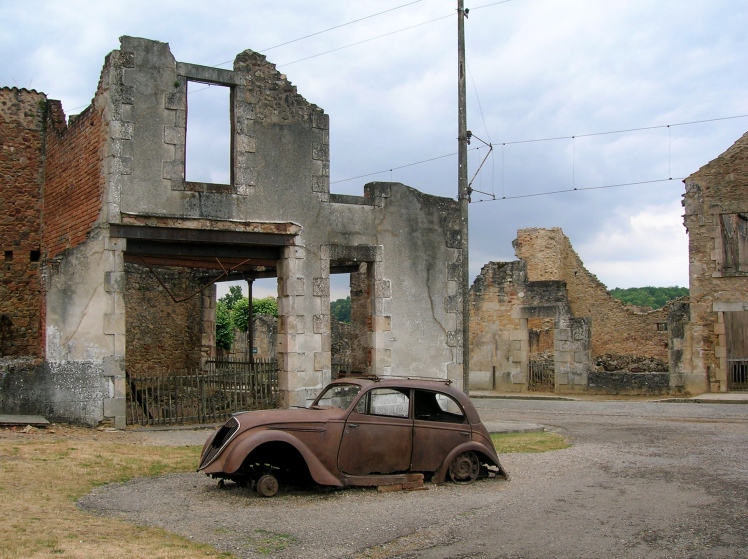 Oradour-sur-Glane is located in France: a fully preserved, ruined village that was the site of the worst Nazi massacre of civilians carried out on French soil. 642 people, including 247 children, were shot or burnt alive on 10 June 1944 in an unexplained act of barbarity. The place hasn’t lost its authenticity. They still serve to show where certain criminal ideologies can lead, what humans can do to fellow humans. 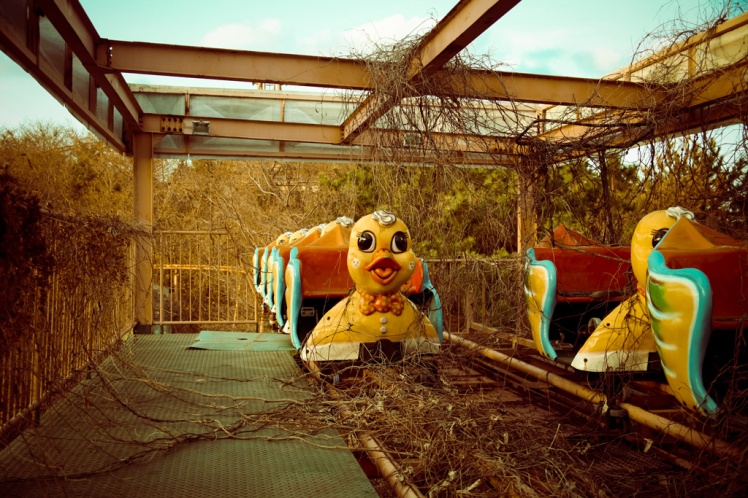 Located in South Korea, Okpo was most popular amusement park in early times. The park was popular and profitable in its early years, but in the 90s, things began to change. A young girl was killed by the park’s duck-themed ride. The Owner of Okpo Land offered no compensation, no apology and no explanation to the daughter’s grieving family. Okpo Land closed overnight. The owner disappeared. The rides, the buildings, the pool — everything was abandoned exactly as it was. Still the park remained atop the hill for over a decade where it became a favorite spot for graffiti artists and urban explorers.

Humberstone is a former mining town in the Atacama Desert, a few hundred kilometres from Chile’s borders with Peru and Bolivia. It was named after James Humberstone, a British chemical engineer who emigrated to South America in 1875. For a while in the late 19th and early 20th Centuries, almost all the saltpeter (White Gold) in the world came from the Atacama Desert.

When World War One broke out, the British blockaded exports of saltpetre to Germany. That prompted the Germans to look for alternatives, and they invented synthetic substitutes that could be used to make fertilizer. Suddenly, no-one needed Chilean nitrate anymore and the industry collapsed. These days, Humberstone is a ghost town. No-one has lived or worked here for half a century. It is now a United Nations World Heritage Site.

MyTripKarma  is a one-stop solution to all your travel needs, allowing you and your friends to easily plan, discuss, organize and book all your vacations, weekends and evenings in one place! Sign up today to start planning your next trip…Completely free!